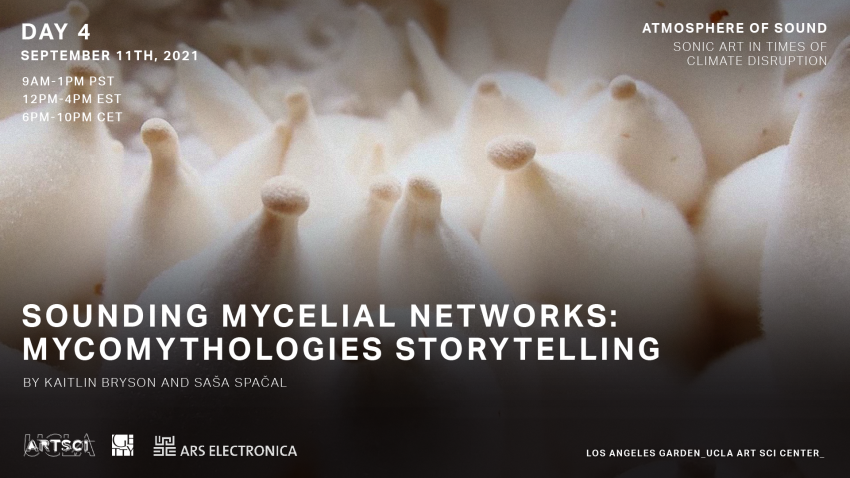 Welcome MycoExplorer to an online workshop, which will take you on a material and perceptual journey through nodes of the MycoMythologies: Storytelling Circle to equip you with narrative tools to tell personal stories and mythologies entwined with fungal ontologies.

The journey starts with embracing clouds of spores floating around fungal and neural networks with the  Spores and Networks Meditation. Path then continues with the Carrier Bag Weaving Tutorial teaching you to make your basic tool for mushroom picking while contemplating the possibilities of entwining narratives beyond linear, progressive techno heroism. Next step is unlocking an attunement to a place, thinking with the space you walk through while listening to How to be a Mushroom Hunter Soundwalk, exploring your situatedness and belonging  with storytelling objects gathering  and map making.
As an example of the proposed artistic approach we provided a mycomythological artwork MycoMythologies: Infrastructures for Each Other, which summons human, mycelial and computer-vision-agencies to join together in a performance of entanglement. With the panel of exceptional researchers of fungal underground networks and moisty ecologies they inhabit, we  explore the thesis of Fungi as Model Organisms for Ecological Survival.

Spores and Networks meditation gently guides you into the mycelial-mind via spores, learning about fungi and their capacity for connections and entanglements. For this meditation you will need a quiet space to sit or lay down, headphones and a glass of water. Once you are comfortable, you can relax and get lost in the network.

The Carrier Bag Weaving tutorial invites participants to create a physical network, woven together to make a small carrying bag for collecting items on their mushroom hunting journeys. Inspired by Ursula K. Le Guin’s essay, The Carrier Bag Fiction of Theory (1986), the carrier bag is a nonlinear tool for gathering and storytelling that offers a meaningful ideological shift redefining the linear progression of human history from domination to one of horizontality celebrating gathering, holding and sharing. Through the repetitive process of weaving, this tutorial offers participants contemplation on the possibilities of entwining narratives beyond techno-heroism and into collective activism. To make a carrier bag you will need: scissors, yarn, tape measure, hooks.

Off- screen Soundwalk: How to be a Mushroom Hunter?

Welcome to an expedition, an exercise in sensory attunement, an exploration for objects that will help you tell stories and weave mythologies. Take a minute to gather yourself and some items for the walk. You will need to bring along with you a smartphone, headphones, a journal, something to write with, and your carrier bag or some other bag to collect objects in. Along with these things, we recommend you bring items to keep you safe – some water, warm clothes if necessary and maybe a facemask. Please, be sure to keep yourself safe during the walk, we want you to get into an embodied and meditative state, but not to lose sight of your surroundings. In fact, the opposite is needed.

To become a mushroom hunter means to become a master in the arts of noticing. To open into a deep awareness of the relationships that surround you, and employ this awareness as a tool of attunement to places, objects, or beings. You will probably be walking alone, but know that somewhere, sometime, there are others walking and exploring. You are never really alone, there are always fungal networks entangling and supporting you.

On your journey you will collect storytelling objects. These are objects that you can hold in your hand that help you tell a story. They provide you with physical and visual information that allow for multiple perspectives such as one of the storyteller, one of the object, one of the listener … Storytelling objects provide ways of understanding the network, teaching about qualities, strategies, symbols or metaphors navigating the entanglement of human and more-than-human networks.

You will find the objects while on the soundwalk. Observe the space you are walking through and see what draws you in, see what connects with you, while you are walking. Gather whatever those objects are that speak to you and gravitate towards you. Maybe write down the notes, and the locations of your findings. Pick at least 10-15 things. Feel free, let them be as diverse and strange as possible. Objects can have many forms: physical, notes, maps, photos, audio or video recordings.

As a mushroom hunter you need to know how to pick, collect and decide on what is healthy and what is poisonous, what helps your story, supports it and helps to convey the teaching and what doesn’t and derails the story.

Video Essay: MycoMythologies: Infrastructures for Each Other

MycoMythologies: Infrastructures for Each Other summons human, mycelial and computer-vision-agencies to join together in a performance of entanglement, providing understanding that the practices of human and other-than-human infrastructures are made with and informed by one another. Working with the AI networks of styleGAN, trained on datasets of human faces, mycelium, roots, rivers, pipelines, roadways and extraction facilities, infrastructures in the latent space are generated to enfold and erode into each other. Becoming infrastructures for each other.

The video essay is an attempt at polyphonic montage that allows the digital image to be formed with agency of multiple human and non-human forces while revealing its constitutive parts – the pixels. The infrastructure that enables humans to generate and see digital images is exposed with pixel sorting flow, hinting at the fact that digital images are one of the tools that enables human beings to see beyond our species, thus its production should be questioned constantly.

Dr. Matthias Rillig is professor and head of a large and lively Plant, Fungal and Soil Ecology research laboratory at the Freie Universität Berlin since 2007 and has been on the list of highly cited scientists every year since 2017. Rilling’s laboratory is part of the Institute of Biology and the Berlin-Brandenburg Institute of Advanced Biodiversity Research, with a versatile research area focused on soil ecology and global change biology as well as arbuscular mycorrhizal fungi and saprobic fungi. Laboratory in collaboration with podcaster Anja Krieger has also produced an extremely informative podcast entitled Life in the Soil, which I recommended to anybody interested in the topic.

Dr. Toby Kiers is an evolutionary biologist, university research chair and professor at Vrije University Amsterdam. Toby Kier’s research field includes underground fungal networks, symbiosis, evolution and mechanisms of stabilizing cooperation between different species in nature. She pioneered an economic interpretation of the interactions and exchanges between plants, fungi and microbes in mycorrhizal networks. In October, together with a group of activists, scientists and designers, she is launching SPUN, the Society for the Protection of Underground Networks. The aim of SPUN is to explore and map global underground ecosystems and learn to harness fungal networks in the fight against climate change.

Peter McCoy is an interdisciplinary, systems-oriented mycology educator with 17 years of experience, McCoy is considered one of the most prominent voices in the modern mycology movement. His work is widely regarded as pioneering in the topics of accessible mushroom cultivation and mycoremediation, while his in-depth mycological knowledge has also elevated his voice to one of the foremost in the less-explored fields of fungal evolution, fungal communication, and the history of fungi in human cultures.

In 2016, McCoy published the book Radical Mycology: A Treatise on Seeing & Working With Fungi to share his accumulated skills, experiences, and knowledge. The book’s unprecedented depth, breadth, and perspective on the science, applications, and cultural importance of mycology have been praised as among the most significant contributions to these fields in the 21st century.

Danielle Stevenson has an interdisciplinary background in environmental and agricultural science and has worked on research, design and implementation of projects that respond to complex problems and support ecological and community health and resilience for over 10 years. Danielle is currently a PhD student in Environmental Toxicology at University of California, Riverside, where she studies mycorrhizal fungi in soil remediation and sustainable agriculture. She is also founder and advisor to the Healing City Soils project, DIY Fungi, Mushroom Cultivation Executive with Kapoose Creek Medicinal Mushrooms, a ‘Future Leaders’ fellow with the Foundation for Food and Agriculture and a board member with CoRenewal and the Association for Women in Science (Riverside).

MycoMythologies: Storytelling Circle is an on/off_line performative workshop that evokes and employs the mycelial mind of the attendants through nodes of knowledge gathering practices and embodied mycology. Participants create their own mycomythological, speculative stories to share with one another and donate to the Spawn database. Participants will learn about World Networks Entanglement also known as planetary infrastructures through the various portions of the performative workshop: How to be a Mushroom Hunter soundwalk, Spores and Networks guided meditation, Mycelial Storytelling Objects, Carrier Bag Weaving tutorial and Mycelial Map-Making. Each portion of the workshop is a node in the mycelial web: networking, expedition, gathering story spores, making maps, storytelling and spawn.

Kaitlin Bryson: Ecological artist concerned with environmental and social justice. Her art practice and activism are focused on biological and metaphysical applications of healing, responding to the pervasive persistence of harm in the world. Bryson primarily works with fungi as resource, metaphor and collaborators for her artworks. Bryson received an MFA in Art & Ecology from the University of New Mexico and currently lives and works in Los Angeles, CA . Bryson has received support from the Lannan and Andrew W. Mellon Foundations to create ecologically, remediative artworks. In 2019, Bryson co-founded The Submergence Collective an environmental arts collective focused on projects that imagine more collaborative, creative, hopeful and ecologically connected futures for our human species and rest of the living world.